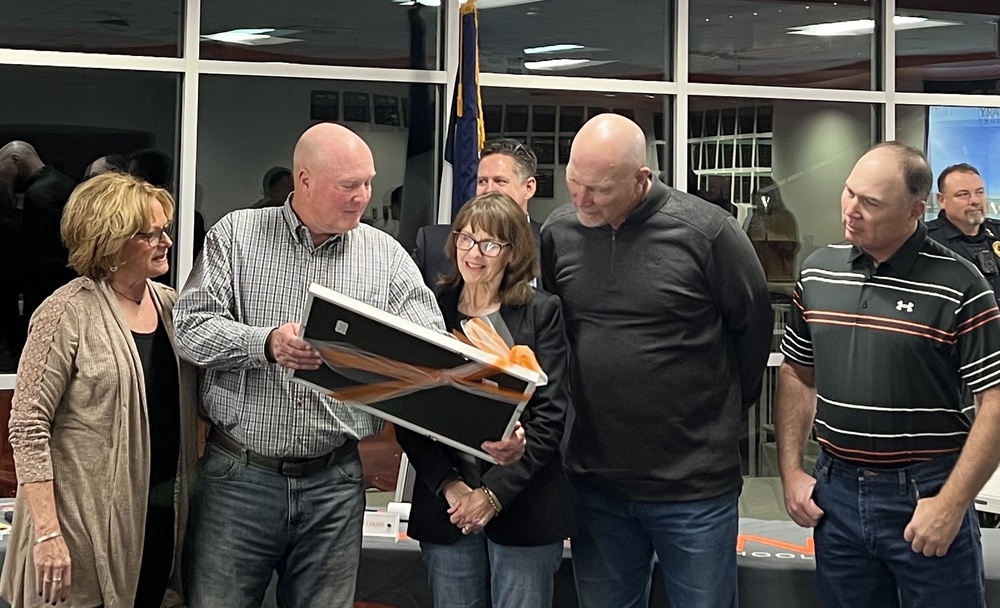 During the Jan. 23, 2023 Board of Trustees meeting, the Board unveiled the naming of Celina’s ISD’s Elementary #3 as Bobby Ray and Afton Martin Elementary School. The Board invited the Martin family members to the Board meeting as part of the surprise unveiling. The Bobby Ray and Afton Martin Elementary School and the Jerry & Linda Moore Middle School sits on the farmland where the Martin family lived from 1916 to 1984.

“We are so honored to have named our newest elementary school after Bobby Ray and Afton Martin,” Kelly Juergens, Board President, said. “The Martin family is beloved and has a long legacy of celebrating all things Celina and Celina ISD.”

Bobby Ray’s parents R.G. and Rebecca Martin moved to Celina from Georgia in 1914. The family raised cattle and started farming the land in 1916. The Martin’s had eight children and their youngest, Bobby Ray was born in 1930.

After high school, Bobby Ray served in the United States Air Force. After serving in the Air Force, he returned to Celina and continued farming his family’s land and worked as a rural mail carrier until he retired. Bobby Ray married Afton in 1953 and had three children, Mark, Paul and Brian, who are all graduates of Celina High School.

The Martin’s were devoted to Ceina. From academic meets to sporting events, the Martins were known to be dressed head-to-toe in orange and white cheering on their sons, then their grandchildren and then their great grandchildren. Both were highly regarded as contributing citizens serving on district and church committees. Bobby Ray was one of the founding fathers of the Celina Quarterback Club and Afton was heavily involved in the creation of Bobcat Moms.

In 1960, Bobby Ray followed his father’s footsteps by serving on the Hubbard Trust Board and Afton served as Treasurer. In 1961, Bobby Ray was elected to serve on the CISD Board of Trustees where he served as a Trustee for 20 years. He stepped down from the Board in 1981 when his daughter-in-law Carol was hired to teach in CISD.

The Bobby Ray and Afton Martin Elementary School will open for the 2023-24 school year. During the fall of 2023,  a dedication ceremony will be held to honor the Martin family and is open to the community.